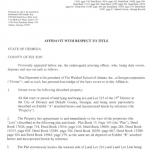 After meeting with Conway Road neighbors on June 28, 2008 (a Saturday), then Waldorf School of Atlanta attorney, Rose McConnell filed an affidavit with DeKalb County, GA claiming the piece of land which she claimed neighbors did not rightfully own.

No land lot line in the history of Georgia has ever been a) moved or corrected; b) physically identified on the ground.

The affidavit has no impact on the deeds of the affected property owners, but it does serve to cloud the title of adjacent property owners.  And, unopposed would have later been used to improperly revise the Waldorf property deed and claim neighbors property without a hearing.

Multiple attempts were made by our attorney to ask Rose to retract this affidavit. Neighbors on Conway even contacted and talked with other members of Waldorf to explain the history of the area in dispute and the scriveners error which Rose latched onto to start this mess. Those attempts had no effect on Waldorf.